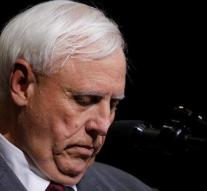 washington - Jim Justice, the Democratic Governor of the American State of West Virginia, is transitioning to the Republicans. That he said on Thursday when he was on stage with Trump at a party meeting in Huntington.

66-year-old Justice was known as Conservative Democrat. 'The Democrats are increasingly moving away from me. I can not help you anymore as Democrat, so I register as a Republican, 'Justice said.

He had only been governor of West Virginia since January after winning the elections in November 2016.

Justice was increasingly exchanging a party, according to The Washington Post, he was registered as Republican until 2015.