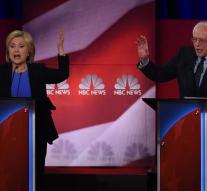 charleston - Democratic candidates for the US presidential election in November, Sunday held a debate about the particular health care, gun ownership and the power of large companies. It was the last major debate of the Democrats for February 1 they hold the first caucuses in Iowa.


Hillary Clinton presented himself as the pragmatic heir Obama and attacked her party colleague Bernie Sanders fiercely. The leftist and reformist Sanders can be a major threat to Clinton. Clinton does for the second time in the race for the presidency and seems to be the face of the established order. In opinion polls, she still has the support of more than half of those surveyed.
Clinton said, for example,, both parties want to work together in Washington. '' Sanders responded by saying that a political revolution is needed.
NEW