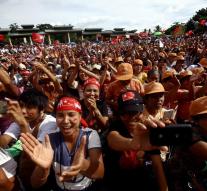 yangon - Activists for human rights in Myanmar demand that all political prisoners be released in the country. In a statement Tuesday local time, let them know that the Government of Myanmar would thus show a democracy to want to build.

The requirement is done in the light of the general election in Myanmar on November 8th place.

In the country for decades ruled by a military dictatorship, which several years ago organized the political situation gradually eased and elections. In 2011 the military government was formally abolished and installed a new parliament. In November, there are presidential elections.