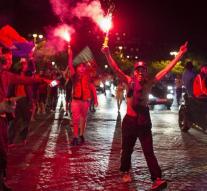 - Portuguese responded Sunday rampage at the first European Championship victory of their country. In the capital, Lisbon, thousands of people took to the streets to celebrate the victory over France.

,, It's insane, '' shouted a 17-year-old fan at the Praca do Comercio in Lisbon. The game had to be followed in the main square on huge screens.,, I've never seen something fantastic '' shouted another football fan.


The Portuguese president Marcelo Rebelo de Sousa appeared to have watched the game. He told television station RTP always trust to have had a happy ending.,, This was Portugal at its best, '' the president smiled.