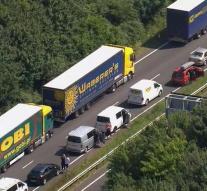 dover - Motorists have to wait until Saturday to 14 am on the road to the British port of Dover.

That the BBC reports according to British authorities, who speak,, extraordinary disruption 'of the movement towards the ferry to France.

The backups started Friday by border controls carried out by the police in Dover, at the request of the French authorities. The reason for the strict controls, the recent terrorist attacks in France.


Due to the high number of holidaymakers and understaffing at border checks and delays continued to rise. According to the British police waiting times could take until Monday.