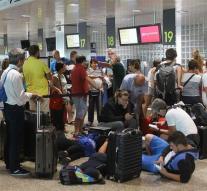 amsterdam - The hundreds of Dutch who were forced to spend days longer than planned on Madeira because their flights were removed, are back in their own country. A plane of travel agency Corendon landed early on Thursday morning at Schiphol Airport.

TUI brought back home vacationers already stranded. They were taken to ferry to the neighboring island of Porto Santo on Tuesday, fleeing from there to the Netherlands. Additionally, there were about 330 people.

Airlines were forced to delete dozens of flights last weekend because of the bad weather conditions on the Portuguese island in the Atlantic Ocean. There were also people who were unable to reach their vacations. For example, a plane with Dutch people who had left Sunday turned around because countries were not in it. Several travelers complained about a lack of information and hotel rooms.