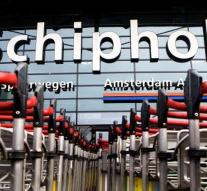 amsterdam - Many passengers on Schiphol last Tuesday suffered long delays due to a strike by French air traffic controllers.

'This means that the French sky is partly closed. The action lasts until Wednesday morning, telling the strikers. The delay at Schiphol for flights to the south, for example Spain, is already up to an hour. This can get worse during the day, 'said a spokeswoman for the Netherlands Air Traffic Management.

It is the second time that the French have put the job down. KLM also has a lot of trouble there. Vacations are also subject to waiting times on Tuesday.