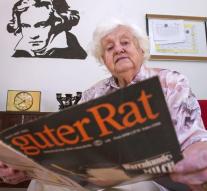 dresden - A room in an elderly house in Dresden, Germany, has been transformed into a true East German house. This to the great joy of her residents, most of whom suffer from dementia. The space looks like the dozens of times have stopped, and the inhabitants wear their days as they did it fifty years ago.

The furniture dates back to decades and speakers speak music from the former East Germany. In the evening, in the kitchen, peppers, tomatoes and sausages are sliced ​​for the Hungarian salad where the elderly used to be so fond of it. Clothing is ironed with a heavy iron iron.

According to the director of the home, Gunter Wolfram, it is hard to believe that many of the elderly who are enjoying a meal have not been able to get their bed all day long. 'From the first day this room is a big success. The residents are very happy to recognize things from before. They feel relaxed here. '

Soon it became so busy in the room that Wolfram decided to create a second space. This was decorated as a house of the seventies- including psychedelic patterns on the wallpaper and orange accessories. On the record player is a record of the Beatles.

According to German physician Herlind Megges, who is not involved in the home at all, the retrieval of a known environment for demented people is a kind of memory therapy. It can greatly improve the well-being of many patients, says Megges. 'In this way, it actively activates what is still known in the brain- and so it still works. It is important that these people who do not feel comfortable in this world because it feels unknown can live in a space where they feel comfortable. '