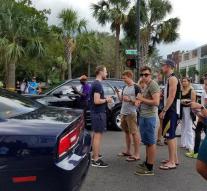 charleston - A fired washer has shot a restaurant's chef in American Charleston, according to American media. He also hosted a number of people hostage, they did not get injured.

The confused perpetrator has been shot by the police, he is in critical condition at the hospital. He would have entered the kitchen with a gun and shot his former chef dead.