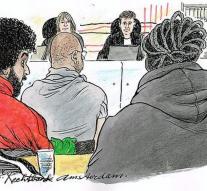 amsterdam - A day after the firm requirements of the Prosecution against ten suspected members of a temp agency for assassins, today is the defense of the word.

Yesterday the prosecutors demanded prison sentences ranging from one to seventeen years against ten men. According to the public prosecutor are the hardened criminals that are only after money and prestige in the criminal world. The DA's are convinced that preventing liquidations with the arrest of the men, but can not prove it. The men will be preparing blamed for murders, but not actually committing it. Starting today, the lawyers will try to shoot holes in the evidence.

The Telegraph will be live tweeting from 9. 30 hours from the courtroom.