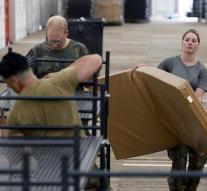 brussels - The Netherlands expects this year 1.17 percent of gross domestic product (more than 8.68 billion euros) in defense. Last year it was 1.15 percent, or 8.23 ​​billion. This is evidenced by figures released by NATO on Thursday over the 28 Member States. In order to reach the 2 per cent where the military allies strive in 2024 is a long way to go.

The Netherlands takes 21th place. The average for the European NATO countries is 1.47 percent, with which the rising line is being continued. Luxembourg declines with least 0.44 percent. The only two countries that remain below 1 per cent are Belgium (0.91) and Spain (0.92).

Five European countries get the standard: Poland, Romania, the United Kingdom, Estonia and Greece. Canada is at 1.31 percent and the US at 3.58.

Of the 8.68 billion euros spent by the Netherlands this year on the armed forces, a little 17 percent is spent on military equipment. According to the agreements, that must be 20 percent.