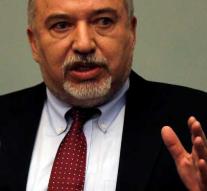 jerusalem - Israeli Defense Minister Avigdor Lieberman has announced his resignation. He reacts to the ceasefire that the Israeli government has entered into with the militant Palestinian Hamas movement on the initiative of Egypt.

The Palestinians announced on Tuesday that they would let their weapons rest if Israel did the same. Then the peace returned to the Gaza Strip.

Lieberman speaks of 'capitulation terror' and announced to step out of the conservative government of Benjamin Netanyahu. He also stated that his party is withdrawing from the government coalition, leaving Netanyahu with a tight majority of a seat in the Knesset.