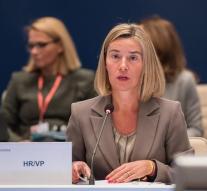 - All 28 Member States of the European Union are in favor of closer military cooperation, including the United Kingdom. That said EU foreign policy chief Federica Mogherini on Tuesday in Bratislava after consultation of EU defense ministers.

' I have the words veto, blocking or European army today is not heard in the meeting, '' said the Italian, who chaired the meeting. ' Our citizens want more security, we must heed. There may be some differences of opinion on some of the proposals, but there is much consensus. ''

Minister Jeanine Hennis-Plasschaert told ' to be very much in favor '' of intensive cooperation. ' The shaky world now requires it. '' She repeated not to have a European military headquarters, but ' for making better use of existing instruments and structures. '