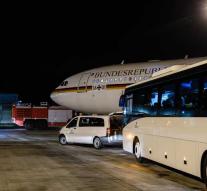 berlin - The problems with the government plane of Chancellor Merkel are not caused by sabotage. There is no indication that there was a malicious intent in the technical malfunction, according to a spokesman for the German Air Force.

He contradicted messages that the plane would have been sabotaged. The crew had to abort the trip to Argentina on Thursday night above the North Sea and make an emergency landing. That was not possible in Amsterdam because with a lot of fuel on board a longer approach route was necessary for the landing. The plane landed in Cologne.