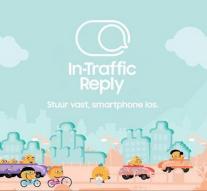 schiphol - Samsung has previously installed the In-Traffic Reply app on its smartphones, including the Galaxy S8 and Galaxy S8 +. People already using these smartphones will receive a notification this week if they want to install the app. That says the company is Friday.

Other devices, such as the Galaxy S7, S7 edge, A series and J series, will default to the app in the future. In-Traffic Reply was launched two months ago.

The app needs to increase traffic safety. In-Traffic Reply responds to incoming messages and calls when the user participates in traffic. The owners can then choose a default response, 'I'm in traffic, so I can not reply right now', a comment with animation or an own comment. Also, the app will temporarily silence all notifications, but people will see what they've missed when they get behind the wheel.

'Everyone knows it's dangerous to use your smartphone in traffic, but many people do not do that hands-free anyway,' says Samsung's Menno van den Berg. 'One feels social pressure to respond directly to calls and messages. At the same time, everyone knows that it's better to leave your smartphone alone while sitting behind the wheel. ''