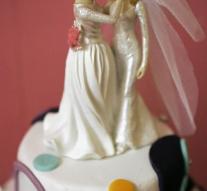 - An American from Oregon baker who refused to bake a wedding cake for a lesbian couple, a compensation of $ 135 000 paid to the US state.

One of the two women was told in 2013 that the confectioner's for religious reasons was not interested to bake a cake for her and her future.

The US then filed a complaint in which the debate in the US about ignoring laws against discrimination based on religion sparked considerable. A Member of Parliament argued that the rights of women were violated and demanded compensation.

The baker initially refused to pay, but this week I caved. He is trying to challenge the penalty still on.