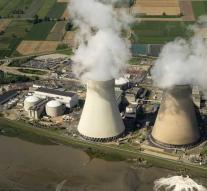 They did so in the police stations of Tongeren, Eupen and Namur. Action groups from the Netherlands, Belgium and Germany want to use their action to ensure that the 'rickety and dangerous scrap nuclear reactors' that they believe are closed in Tihange and Doel.

The declarations are part of a persistent social protest against the nuclear power plants in Belgium, which would pose a danger to residents of the south of the Netherlands. The activists point to a large number of disruptions and silent operations of nuclear reactors in Doel and Tihange in recent years. According to them, those responsible deliberately belittle these incidents. Reason for the activists to report.

In the Netherlands and Germany there is great concern about the safety of the nuclear power plants in Doel and Tihange. In June 2017 a human chain was formed from Aachen via Limburg to Tihange. Some 50,000 people participated. They demanded closure of Tihange 2 and Doel 3, reactors in which, according to the activists, numerous cracks have been discovered.

At Engie's owner of the Belgian nuclear power plants, someone was not immediately available for a response on Saturday night.