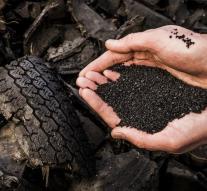 hilversum - Recycling Network has reported due to the use of rubber pellets of old car tires on sports fields.

According to the umbrella of environmental organizations in the Netherlands and Belgium, the use of grains is bad for the environment because zinc is located in the outer layer of the tires. This largely disappears in the soil, groundwater and surface water. In addition, the rubber shredders also involve risks to the environment and health, for example, by bouncing on bats and locks and by other environmentally harmful substances released from the rubber, according to the organizations.

'That's not a good recycling but an infringement of the waste legislation. That's why we are going to the Public Prosecutor, 'says Robbert van Duin, president of Recycling Network in response to messages from Trouw and the Zembla research program.

According to the network, a number of companies are primarily responsible for these environmental violations. 'In addition, we complain about the landowners and managers for the shortcomings in the construction and management of the artificial turf fields. And the municipalities and agencies in charge of control and enforcement, 'says Van Duin.

He states that the Ministry of Housing, Spatial Planning and the Environment in 2006 was already at the highest level of excessive zinc in surface water. 'There was no intervention at that time. The use of rubber pellets on sports fields is very good. '

Last year there was a lot of fuss over the grains on artificial turf after scientists warned that they could contain carcinogens. Further research by the National Institute for Public Health and Environment (RIVM) indicated that the risks are negligible, but according to Recycling Network, this does not apply to the environment.