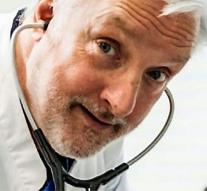 - The Health Care Inspectorate in Viersen has reported against Klaus Ross. This naturopath has spent in a cancer clinic, near the border of Limburg. According to the Inspectorate Ross critically ill patients treated incorrectly, and moreover, failed to alert a doctor when they were in bad shape.

Instead of a doctor to get it, Ross gave the patients a vitamin injection and sent them home, said a spokesman of the Inspectorate in Viersen Friday. Three patients, including two Dutch deceased thereafter.

On behalf of the Prosecution in Krefeld Ross clinic was ransacked last week Friday. Thereby were screened include patient records. After inspection it the Four Sense Inspectorate did return.


Pending the investigation Klaus must cease its activities.