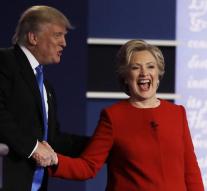 - In the first televised debate between the US presidential candidates Hillary Clinton and Donald Trump on Monday in the US 80.9 million people watched. That's a record for such an election debate, CNN reports.