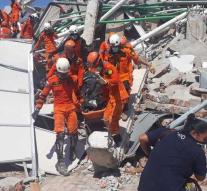 jakarta - The number of deaths as a result of an earthquake and a tidal wave in the northwest of Sulawesi rose to 1203. This is reported by the Indonesian news site Kumparan, which refers to the national police. The Indonesian authorities have not yet confirmed the number.

The national disaster response so far spoke of 832 deaths. Sunday morning the service already expressed the expectation that the number will increase considerably.

According to the national disaster response Sunday afternoon alone, at least 821 people in Palu, the largest city on the west coast of the fourth largest island in Indonesia, died. More than 500 people were seriously injured, dozens are still missing. Among them are several foreigners, including three French.

The Indonesian President Joko Widodo visited Palu on Sunday. He appealed to his compatriots to have patience. A lot of help is offered from abroad. The European Commission has made 1.5 million euros available for emergency aid.