Home / World / Deaths of the volcanic eruption Guatemala is rising 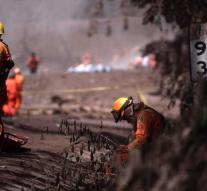 guatemala city - The death toll due to the volcanic eruption in Guatemala has risen to 99. That is what the Inacif emergency response service in the Central American country reported.

The Volcán de Fuego in Guatemala had a new eruption on Tuesday, after the heavy eruption of last Sunday. That was the heaviest in forty years. Six villages in the affected area were evacuated and more than three thousand people had to leave their homes. In addition to the nearly one hundred deaths, nearly two hundred people are still missing.