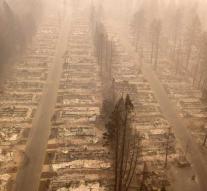 paradise - The death toll from the forest fires at Paradise in California rose to 83. After the fires now floods and mudflows threaten the area, warns sheriff Kory Honea of ​​Butte County.

The number of missing people due to the forest fires and the evacuation has been reduced to 563. The number of missing persons was at almost a thousand at the beginning of this week, but more and more people are on the list again and some are declared dead. As far as known, around 52,000 people were evacuated in and around Paradise and 13,503 homes were destroyed by the forest fire.