Home / World / Deaths of Florence rise to at least 23 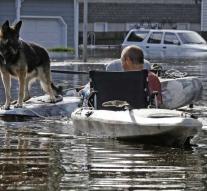 washington - The death toll due to hurricane Florence on the American east coast rose to at least 23. Most of the victims fell in the state of North Carolina, where the coastal town of Wilmington was cut off from the outside world by the high water. The flooding can last for weeks.

Seventeen people lost their lives in North Carolina. Among others, it concerns a mother and child who have been hit by a tree, the authorities say. The death toll in neighboring South Carolina is six. Four people died from traffic accidents. Also two people who used a generator died of carbon monoxide poisoning.

Rescue workers have recovered the body of a one-year-old boy on Monday. The water had pulled him out of his mother's arms, reports American media. She had, according to the police, ignored a deposition and drove a closed road with her car. There, the water dragged the vehicle off the road. The driver could put himself in safety, but her son did not survive.