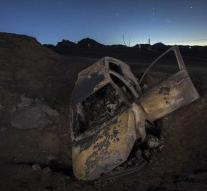 los angeles - The number of deaths from forest fires in northern California has risen to 56. At least 130 people are missing, according to a new list of names published by the authorities.

The missing people are mainly older people over 65 who come from the heavily hit place Paradise. That burned for the most part. More than 8900 buildings fell prey to the raging fire. Approximately 50,000 people have been evacuated.