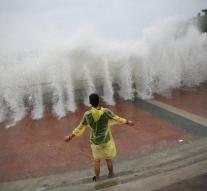 - At least five people have died in Vietnam after Typhoon Nida pulled over that country. Seven others missing, local authorities said Friday.

The whirlwind accompanied by heavy rainfall that caused flooding. Certainly 140 homes were destroyed and hundreds of families had to find a safe haven. Among the dead were three children.