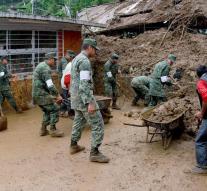 Among the dead are two families with children in the state of Veracruz. Their houses scattered by the storms in. In Xalapa, capital of Veracruz, forty families were evacuated.

The storm Wednesday Earl was still regarded as a hurricane of category one. Storms with such force normally cause any damage to (solid) buildings. Earl has been less powerful since he reached the coast of Belize. Thursday night drew tropical storm with heavy rainfall over the southern state of Tabasco in Mexico.