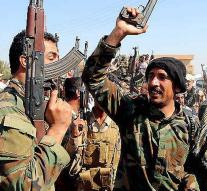 baghdad - By bombings in and around Baghdad Saturday at least nine people have been killed, said police and medical sources. The attacks are not claimed immediately but militants from Islamic State who control large parts of the north and west of the country put more bombs in the Iraqi capital.

Five members of the security forces and one civilian were slain in Tarmiya, 25 kilometers north of Baghdad, when a suicide bomber blew himself up near a security checkpoint.

A bomb in the northwestern district Duwolim killed two people, while nine people were injured. By an explosion south of the capital, one person was killed and six were wounded.