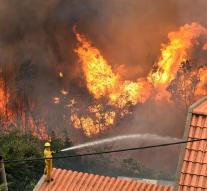 According to the newspaper, the three victims died in their home. Approximately one thousand people have been evacuated from their homes and from hotels. A hospital and a shopping mall were evacuated. Several buildings have gone up in flames. Below is a luxury hotel.


The fires raging near Funchal, Madeira's capital. According to the authorities, is the historic center of the town of hazard.