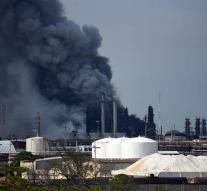 - The number of deaths caused by the explosion at the oil refinery in the Mexican state of Veracruz stands at 28. The Mexican state oil company Pemex made the death toll on Friday (local time) known. Meanwhile identified 25 victims.

For a detailed inspection of the crash site, where drones and sniffer dogs were used, bodies were found again. Over a hundred people were injured in the explosion. Eighteen of them are still in hospital, of whom thirteen are very seriously injured, according to Pemex. In addition, several people are missing.

Research must show what
The explosion has caused.