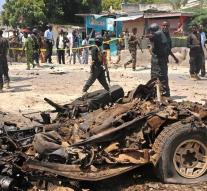 - At least ten people were killed Sunday by two suicide car bombings in the Somali town of Galkayo. According to police, the victims civilians and members of security forces.

The jihadist terrorist organization al-Shabaab claimed responsibility for the attacks.


Galkayo is in the semi-autonomous Somali region of Puntland.