Home / World / Deaths by heat wave Japan is on the rise 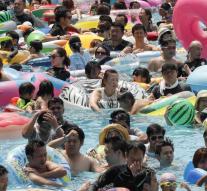 tokio - An intense heat wave in Japan has cost the lives of at least fourteen people in recent days. Thousands of people had to be treated in hospitals after they became unwell due to high temperatures, reports Japanese media. The mercury rose to above 39 degrees in some places on Monday.

Japan was also hit this month by unprecedented heavy rainfall and flooding, resulting in more than 200 deaths. The heat wave of the past few days has made it difficult for military personnel and volunteers to clean up mud and debris. 'It's very warm. All we can do is keep drinking water '', a man in Okayama told news channel NHK.

One of the victims who died as a result of the heat is a woman in their nineties. She was found unconscious in a field. The Japanese Meteorological Institute warns that the high temperatures in combination with a high humidity result in dangerous conditions. The heat wave presumably lasts for the rest of the week, and possibly even longer.