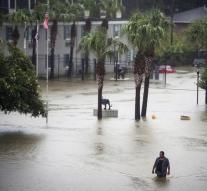 - Definitely 20,000 people have been rescued from flooded areas in Louisiana. The southern US state is struggling with heavy flooding. Victims were picked off cars, houses and hospitals, said Governor John Bel Edwards Monday. At least five people drowned.

The floods are the result of abundant rainfall. The rain area has since moved away to Texas, but,, even though the sun is shining, the water level may rise again, 'Edwards warned.