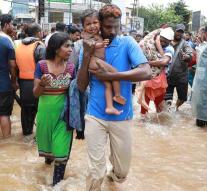 delhi - The death toll due to the floods in the South Indian state of Kerala is rising rapidly. According to local media, the unprecedented heavy and long-term rainfall has killed some 324 people. The authorities report 186 deaths. Thousands have become homeless.

In all but one of the fourteen districts of the popular tourist area, with beautiful beaches and a hinterland with lots of natural beauty, code is red. Although the weather improved on Friday, the outlook is ominous. The meteorologists expect serious nuisance in the region until 20 August due to heavy monsoon showers. There are already 37 percent more than usual.

Army units have joined the regional and federal emergency services that are evacuating people who are enclosed by the washing water and mudflows. They are on roofs or have sought refuge on higher ground. In the 1500 refugee camps, 223,000 displaced persons now reside.

The Kerala government speaks of the second largest flood of floods since 1924. It says that at least 23 bridges have collapsed and 211 landslides have been reported. It is estimated that 10 000 km of road have been destroyed and more than 20 000 houses are currently uninhabitable. Furthermore, as many as 180,000 farmers have been duped. The damage is already estimated at more than a billion euros.