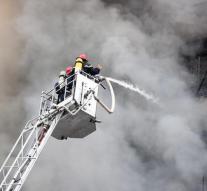 - A fire Thirteen people were killed in a karaoke bar in Vietnam. The fire raged in a bar in the capital Hanoi. The operator would not have a license and the establishment did not have the required fire extinguishers, as research has shown first.

The fire broke out in a building in the district of Cau Giay and hit on at least three other buildings. Dozens of people were able to make his escape but twelve men and one woman were killed. The fire department needed five hours to get the fire under control.