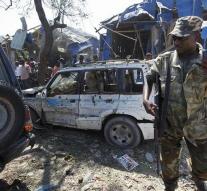 - An attack with a car bomb at a police checkpoint near a busy market in the Somali capital Mogadishu on Saturday at least ten people killed. Responsibility for the attack has not been claimed, but the suspicion goes to the radical Islamist group al-Shabaab.

More than a dozen people were injured. The whole market in the Waberi district was in ruins, said a police spokesman.

In Somalia are now spread out over several weeks held elections for a new parliament. Some 14 000 people from the various states have chosen to elect 275 representatives in parliament, who eventually appoint a president. According to al-Shabaab are all candidates pallbearers from abroad.