Home / World / Deaths and damage to temples in quake 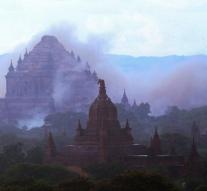 yangon - An earthquake in Myanmar on Wednesday certainly claimed three lives. The victims were two young girls and an adult. The famous temple complex of Bagan in the middle of the country has also damaged by the natural disaster. Buddhist temples and pagodas are among the main tourist attractions of the Asian country.

The girls who were standing were killed on a riverbank which sank when the ground began to shake, reported the fire. Elsewhere one fatality fell when a tobacco factory collapsed.

A BBC correspondent said that the archaeological service in Bagan were about fifty damaged buildings. The oldest buildings in Bagan, also known as Pagan, are a thousand years old.

Was once the site in the middle of the country, the capital of an eponymous kingdom. Since the ninth century, there are many thousands of religious buildings erected. Between 2000 and 3000 temples and pagodas have stood the test of time, despite the fact that Bagan is frequently hit by earthquakes.

The quake on Wednesday had according to the US Geological Survey (USGS) a magnitude of 6.8 and occurred at a depth of about 84 kilometers. According to various media in Southeast Asia shook the ground even in India, Bangladesh and Thailand.