Home / World / Death Warmbier is a mystery for North Korea 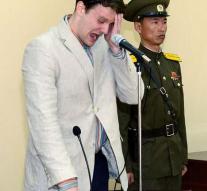 seoul - The death of American student Otto Warmbier is, according to North Korea, a 'mystery.' The country responded on Friday to the death of the man who was in North Korean prison since January 2016 and was sent to bad health earlier this month the United States.

A spokesman for the North Korea Ministry of Foreign Affairs denied that Warmbier was abused during his detention. Without giving details, the spokesman underlined that former President Barack Obama is responsible for the slow extradition of the American to the US. 'Warmbier has become the victim of Obama's strategic patience,' said the spokesman.

At the time of release he would have already been in coma. The student was convicted in North Korea for fifteen years of forced labor for theft of a propaganda fatal with former leader Kim Jong-il. The family said Monday that Warmbier died of brain injury as a result of abuse in North Korea.