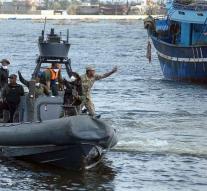 - The death toll from the capsizing of a fishing boat full of refugees last week has risen to the coast of Egypt to 202. A regional governor said Tuesday that number ' almost final '', but said there was still searching for victims at sea.

It is unclear exactly how many people were aboard. The refugees were from Egypt, Sudan, Eritrea and Somalia and probably wanted to cross to Italy. Four members of the ship were arrested.

According to the International Organization for Migration (IOM) more than 3,200 people have already died this year in attempts to stabbing the Mediterranean.