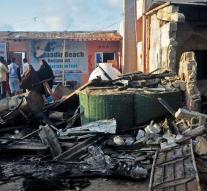 - The number of deaths caused by an attack Thursday night on a beach restaurant in the Somali capital Mogadishu has risen to ten, police said.

The victims were six civilians, two members of the security forces and two assailants. The perpetrators first took a car bomb, after a gunfight broke out with the police. That lasted at least three hours in the night.

Al-Shabaab, a terrorist organization with ties to al Qaeda, has claimed responsibility for the attack.