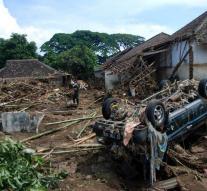 jakarta - The number of deaths due to floods and landslides in Indonesia has risen to 26. Eighteen people are still missing, said a spokesman for the national disaster service Thursday.

Hundreds of residents have fled the affected area on the main island of Java. Most deaths occurred in the central region Garut.

In Indonesia occur floods and landslides during the rainy season each year.