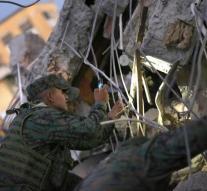 - The number of people according to the authorities, was killed in the earthquake in Ecuador has risen to 413. Also, definitely got more than 2,600 people injured in the quake on Saturday night.

The epicenter was off the coast, about 20 kilometers deep, but the quake was felt hundreds of kilometers away yet in the capital Quito. Buildings collapsed, roads were impassable and in many places the power went out.

At the time of the earthquake, there were about two hundred Dutch in Ecuador who had to register with the Ministry of Foreign Affairs. A small number has not reported in yet, but the department still has no reason to think that Dutch affected by the natural disaster.

According to UN Children Unicef ​​at least 150 000 children affected by the disaster.,, We are in a race against the clock to protect all children against diseases and other risks contained in such emergencies, '' said Grant Leaity, UNICEF Executive Director Ecuador.

According to initial reports, the quake destroyed 805 buildings and 608 buildings damaged. Portoviejo and Chone two hospitals have collapsed completely. Certainly 119 schools have been damaged. UNICEF teams are investigating Pedernales and Esmeraldes, two of the worst affected areas, which require emergency children.

President Rafael Correa warned on Monday that the reconstruction of the country billions of dollars will cost. That may be possible, according to the president,, a huge '' impact on the economy, which was already hard hit by low oil prices.