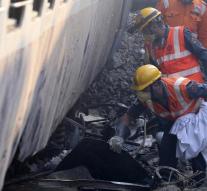 kanpur - The death toll of the train crash in northern India continues to rise. Rescue workers have recovered 142 bodies so far. Over two hundred people were injured when the trains fourteen of the Indore-Patna Express derailed, the newspaper Hindustan Times Monday.

Rescue workers were also more than 24 hours after the accident with might and trying to search for survivors and human remains. Two carriages are still on track.

The train had been under Indian Railways approximately 1200 people on board. However, sources tell The Times of India that there are probably hundreds more were in the train, with regular tickets or without tickets.

The accident is the deadliest in six years in India. The railways carry 20 million passengers daily. They have a bad reputation in the field of security. Last year, in another train accident in Uttar Pradesh 39 people dead.