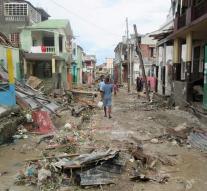 port - Rescue workers in Haiti continue Friday to find more victims of hurricane Matthew. Reuters shall, on the basis of its own count which is now 478 bodies have been recovered.

About the death toll exists some confusion. Reuters relies on figures from local rescuers. The central authority for civil defense, which usually occurs slowly out with new figures, it still holds on 271 victims. More than 61 000 people are still in shelters.

After he had wreaked havoc in Haiti, Matthew is also drawn towards Cuba and the United States. He was Friday just before the east coast of Florida. a state of emergency in several US states and hundreds of thousands of people have been beaten or evacuated before the storm on the run.