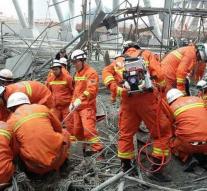 - The serious accident at the construction site of a power plant in China has claimed more lives than previously assumed. Meanwhile regrettable there are 74 dead. Friday morning (local time), it was announced that 68 people have been identified.

Most people died when they were buried under the debris of a collapsed scaffolding and work platform in a cooling tower.

The cause of the accident is not yet known, but we worked under high pressure in the workplace according to anonymous workers. An investigation is launched into the cause.

President Xi Jinping said last year that he would take additional measures to prevent accidents on construction sites. The occasion was a series of explosions at a chemical storage facility, which killed more than 170 deaths. The director of the State Office for Occupational Safety was later fired and indicted for corruption. He had 4 million believed to gifts and bribes.