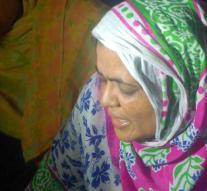 dhaka - A court in Bangladesh sentenced two men to death for the murder of a professor just over two years ago. Three others got a lifetime.

The victim, Rezaul Karim Siddiquee (58), was professor of English at the university in the city of Rajshahi. He was slaughtered with knives when he was waiting at a bus stop. Islamic State demanded the murder later. The man was murdered because of his 'call to atheism'.