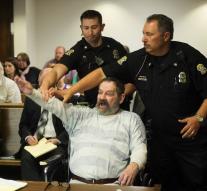 olathe - The 74-year-old Frazier Glenn Cross Tuesday by Judge Thomas Kelly Ryan sentenced to death for the killing of three people at a Jewish center and nursing home in Kansas last year.

Cross, a former leader of the racist Ku Klux Klan (KKK), in September already convicted by a jury court to death. The judge confirms that judgment. The shooter will be given a lethal injection.

The American shot in April last year a 53-year-old woman, a 14-year-old boy and his 69-year-old grandfather died because he thought they were Jewish. Cross said Tuesday in court in Olathe that he regretted his deed, because his victims were found to be Christians.