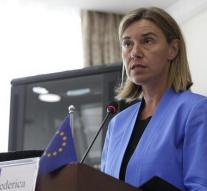 brussels - No country applies the death penalty can become a member of the EU, at this point I am very clear. That said EU foreign policy chief Federica Mogherini this morning in Brussels after consultations with US Secretary of State John Kerry and European foreign ministers.

That gave them basically that Turkey no further need to discuss the reintroduction of the death penalty if it ever wants to join the EU. Turkish President Erdogan suggested last weekend that he wanted the death penalty for the coup plotters.

The events seem visa-free travel for all Turks that the EU had accepted almost all, all to be put on the back burner, anyway. Remains to be seen how the 'immigrant deal' goes, Turkey will take back refugees in exchange for billions.


It was agreed this morning in Brussels that the situation in Turkey is properly monitored so that there will arise no witch hunt. 'This is not only in the interests of the EU but also for the Turkish people,' said Mogherini, who argued that there is enough diplomatic channels open in order to keep Turkey in the respect of human rights.

Kerry stressed that the US and EU will continue to closely cooperate in the fight against terrorism and IS. End this week as international talks on Washington.