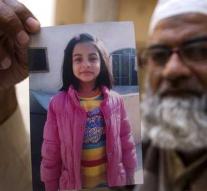 lahore - A man in Pakistan has received the death penalty for the rape and murder of a seven-year-old girl. The death of Zainab Ansari raised a lot of protest in Pakistan because the government would do too little to prevent such incidents. Only after a media campaign was the suspect arrested. He turned out to be a neighbor of the girl.

The body of the girl was found in a garbage container in January in Kasur, south of Lahore. Residents of the area said it was the twelfth time in a year that a girl had been killed.

According to the police, the man's DNA was found on the bodies of eight other girls. The 24-year-old suspect is later tried in the other cases.