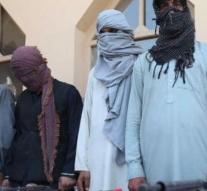 cabul - In a suicide attack at a police headquarters in Afghanistan there are certainly eight deaths and thirty injured cases. The Taliban claimed the attack.

The attack was aimed at a police training center in Gardez, the capital of the province of Paktia, reports the Afghan Ministry of Interior.

Among the victims were both civilians and officers. The attackers were killed by security staff.